Mafioso is an online turn-based Mobile game in which players battle in 1v1 PVP matches. It is a hero-based game, and players have to choose three heroes for each battle. Each hero has three unique cards with different effects. 2 Ability cards and one special card. There is a mana bar that increases each turn and has a maximum value of 10. Each card consumes a constant amount of mana, and the player's turn ends when they don't have enough mana to use any of their cards. However, for special cards, other than mana, players need to have a full rage bar to be able to use them. Using Special Ability completely empties the rage bar. Rage bar increases each turn, and its refill speed depends on the heroes. Each hero has a specific rage refill ratio. Usually, heroes with lower health bar have a higher rage refill ratio.

In this analysis, we are going to analyze various features of this game and find out whether the game is well balanced or not.

We contacted the game developers, signed an NDA, and were provided with all the information we needed. 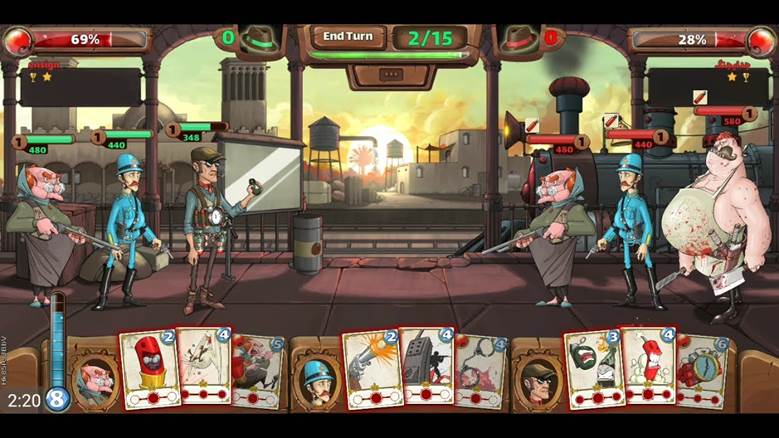 First, we analyzed the ability cards and their effects.
Different heroes have different ability cards, so it is not reasonable to expect the overall damage ratio of all the cards to be in the same range. Overall, the so-called Tank heroes deal less damage.

What we did was comparing each card's damage with the mana it consumes and see if the consumed mana required for each card is fair.
For this, we calculated the expected damage ratio for each card, which is (Damage/Mana), and compared it with the real Damage Ratio.
We didn't consider Special Ability cards here as they are unique and have many effects other than dealing damage.
Moreover, healing an ally or yourself is considered as the same type as dealing damage to the enemy.

The results can be seen in figure 1.

As expected, for most of the ability cards, the expected damage ratio and real damage ratio are the same, but there are some exceptions.

Now, we want to analyze each of these cards, to see if they are not well balanced or have some other effects that were not considered in the expected damage ratio. 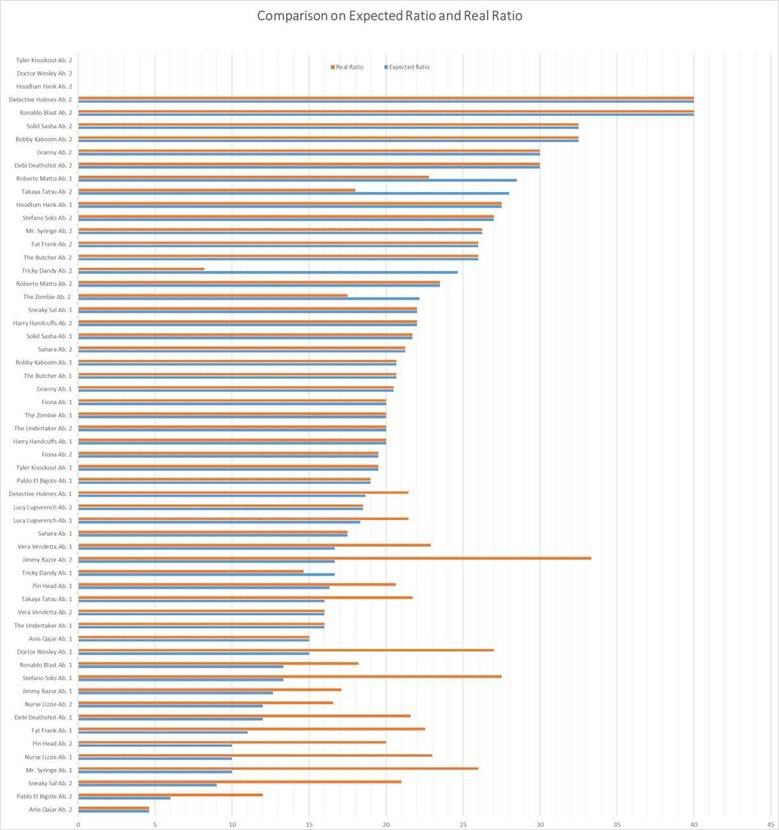 4.    Roberto Matto: Ab. 1: Multiplies damage by 1.2 if used a second time on the same enemy.
This card seems to be a bit unfair compared to other cards from the same class of heroes according to the mana it consumes.


1.    Vera Vendetta Ab. 1: Deals more damage to the enemy that hit her in the previous turn.

3.    Takaya Tatsu Ab. 1: Deals more damage if used on the same enemy in the next turn.

4.    Doctor Wesley Ab.1: Heals an ally.
This card seems to be a bit over-powered compared to the mana it uses.

5.    Ronaldo Blast Ab. 1: Seems to be over-powered.
One reason for this can be because this hero is one of the last heroes that are unlocked.

6.    Stefano Solo Ab. 1: Deals damage to multiple enemies.
This hero has low health, so a higher damage ratio for the same mana compared to other heroes is legitimate.

9.    Debi Deadshot Ab. 1: If an enemy who is marked by this hero attacks in the next turn, Debi shoots her out of turn.

Second, in our game analysis, we decided to analyze heroes and their stats.
As this game has so many special abilities and various features for heroes, finding a strict measurement method for the hero's overall power is a sophisticated subject. But we have tried to consider every possible aspect that differentiates heroes and makes one stronger than the other.
What we expect is all heroes to be in the same power level and have the same overall hero score, but defiantly this is not going to be the case.

We normalized these effects and calculated a number between 0 and 1 for each hero. We have also weighted Health, Damage, and rage differently for more accurate results. Health had the most weight as it is the most important factor. Damage was second, and rage was third.

As the chart shows, heroes are usually in the same range, and the chart has a low variance. Usually, heroes that are unlocked later in the game have a slighter higher overall score. But there are a few exceptions.
Some heroes, unlike the others, are not easy to use and do not deal straight forward damage and need more practice to master.

Hoodlum Hank is a special hero and as said before, has an ability card that does not deal damage but increases special ability card's damage.

Bobby Kaboom has a very high damage ratio but cannot damage a single hero and deals damage to all heroes at once.

Ronaldo Blast His cards have a very high damage ratio but might not explode sometimes, which will result in 0 damage dealt to the enemy.

Note: Pin Head has not been yet released, and this hero might be buffed after a while.

With this told, we will now compare our score with real data that we got from the developers.

Figures below indicate Win Rate, Pick Rate, and Ban Rate for all heroes in all arenas: 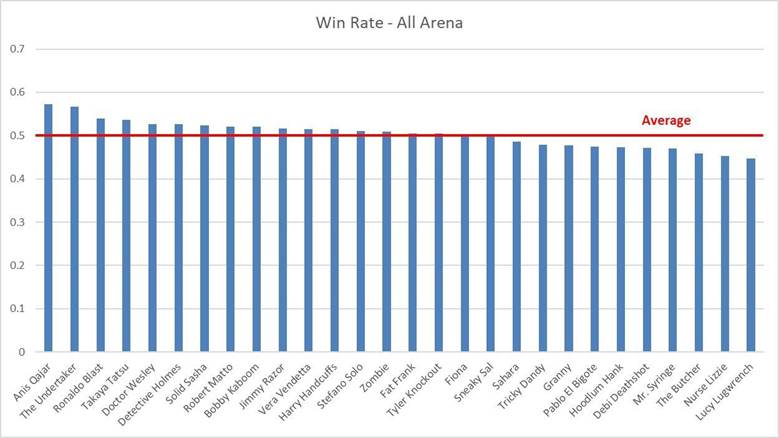 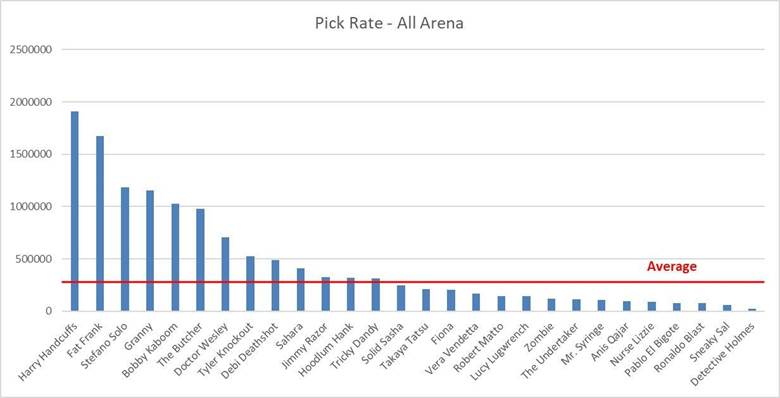 As figure 3 shows, hero score is a good measurement for the overall superiority of a hero over another but there are few exceptions.

As an example, Anis Qajar is a special hero that does not have a very high damage ratio but can prevent enemies from attacking her. Moreover, her special ability increases her ability cards' damage too.
This hero is very powerful and needs to be nerfed.

Pick rate is not a very good measurement because the arena highly influences it.
All heroes are not unlocked from the beginning of the game. They are unlocked as you proceed to higher arenas. Thus, heroes from the first arenas are picked way more often than the others.

Here is the list of heroes based on their arenas:

Table 1: Heroes and their unlocking Arenas 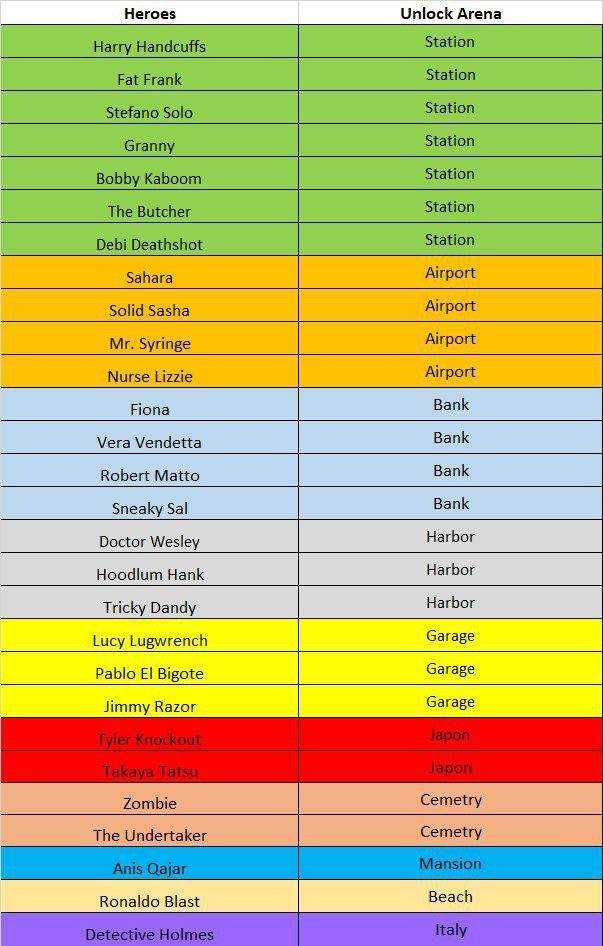 The unlocking arena has a huge direct effect on pick rate. Initial heroes are selected way more often than the others.

Ban Rate is also not a very accurate measurement because players usually ban most annoying heroes, which might not exactly mean the most powerful heroes, though in some cases, overpowered heroes can be annoying.

As an example, Sahara can disappear and technically become invincible. She also can detonate her bombs all at once whenever she wants, which is really on other players' nerves.

For a more accurate result, we decided to calculate a weighted average of Win Rate and Pick Rate.
Here are the results:

The unlocking arena of the heroes still influences this table, but aside from that, the calculated score for heroes is an accurate measurement for a hero's superiority over another.

First, we want to analyze how much the upgrade increases the stats, and then we will analyze the requirements.

The figure below shows Heroes' health increase after each level:

However, the costs are a completely different story.

For each level up, as said before, you need some cards and some Gold, and you will also earn some XP, which will level you up.
Figure 4 shows the requirements for level up and XP gained with heroes' level up: 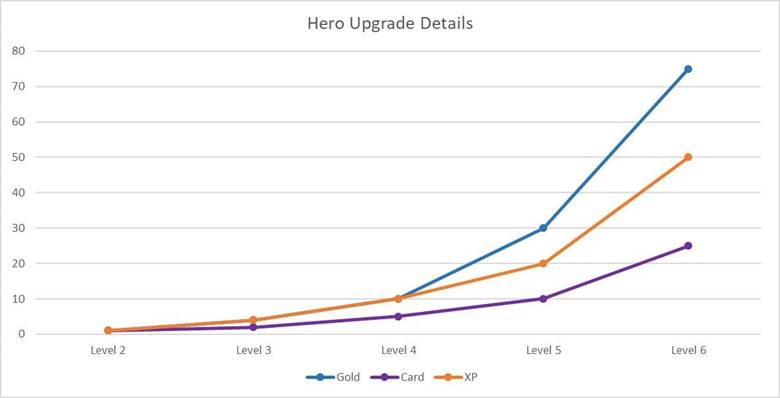 Before going into details, here are the requirements and XP gain with Cards' level up: 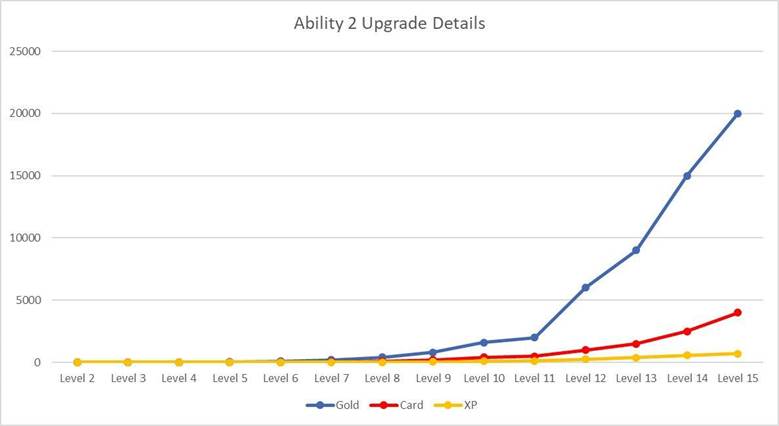 As can be seen, upgrades' requirements and XP's growth are exponential.

Required Gold skyrockets after level 11 for Ability cards. This is due to some factors that we will open below:

1.    Balance between skill and upgrades:
Mafioso is a skill-based game. Players have to learn to play with their heroes before upgrading them and as an online multiplayer, required skill to play in higher ranks in better arenas grow exponentially. That is why required Gold and Cards grow exponentially. This helps players have to practice more with their heroes before upgrading them.

2.    Whales, Dolphins and Minnows:
These are the beating heart of an F2P game.
Players who spend big money, players who rely on their skills but spend when needed and players who do not spend at all.
To balance these players, encourage whales and yet, make minnows spend a much higher time in the game, Upgrade requirements' cost rise exponentially.

Overall, Mafioso is a well-balanced game with complex special features for each hero, which makes evaluating them more sophisticated and harder. We tried to consider as many factors as possible in our calculations and get to the best possible results.
This analysis is in 3 parts and analyzes Ability cards, Heroes, and upgrades. Ability cards are measured based on dealt damage. Heroes are compared based on their health, damage, and rage, and upgrades are analyzed by comparing their cost and the overall stats they increase.
After that on each part we tried to find the reasons behind each chart and analyze our results to find if there is a reason behind abnormalities of the charts or the game has flaws.
We found out that the game is a solid experience and players with any taste and desire can enjoy the game despite the few flaws of the game and upgrade prices that might seem unreasonable at first look.

We can take this analysis a step further by analyzing the math making system and daily reward system to see whether the matchmaking is balanced or not and to see how long it will take to purchase an upgrade for each item.